It was a while ago that Chris van Leeuwen (82) and his son Peter van Leeuwen (52) grew dried flowers. Now that they are totally hip again, they grow the popular Helipterum especially for Greenflor. Buyer Peter Freke takes a look in the greenhouse.

A pretty perfume emanates from the sea of white-pink flowers. The greenhouse at the Peter van Leeuwen nursery in Noordwijkerhout is completely filled with Acroclinium, also known as Helipterum. You know them: white and pink daisy-like flowers with a yellow heart and graceful paper-like leaves. A species that behaves incredibly well as a dried flower and which Peter has grown especially for Greenflor.

“It’s been a long time since these flowers were in our greenhouse”, Peter laughingly admits when I compliment him on his beautiful field of flowers. When I came into contact with him three years ago about the Cortederia, I was immediately impressed by his expertise and craftsmanship. “Dried flowers were out of fashion for a long time, but now they are back. As a child I worked with them in my father’s nursery, but I had forgotten how it worked. There wasn’t a lot of information about growing this variety, so I had to figure it out just as well. Of course I did!” 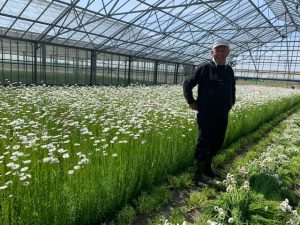 Peter’s father and also founder of the nursery, Chris van Leeuwen (82), keeps a close eye while the first forests are harvested. Chris: “I started growing vegetables 62 years ago. My son Peter was about fifteen when he came to help me. He didn’t want money for it then, because he just liked it. In the meantime he has taken over the nursery. We have grown many different varieties together: from Larkspur, Mona’s, and Rodanthe to sunflowers”.

Rolling greenhouse
Traditionally, the white and pink dried flowers that now fill Van Leeuwen’s greenhouses have been grown outside the greenhouse. Peter: “That’s why we sowed the flowers outdoors at the beginning of spring. Because they first grew outdoors and were exposed to the wind, the flowers have become very sturdy. So we don’t have to use gauze to allow the flowers to grow upright. Only later did we roll the greenhouse over them.”

Only now do I notice the wheels under the greenhouse. Peter continues: “When the weather is nice, we roll the greenhouse off, but if the storms start to hit hard, the greenhouse will once again provide protection. We have to be very careful with fertilizing, because the flowers can’t have too much. The most important thing is to keep the field clean, so that weeds don’t get a chance. This also makes harvesting a lot easier”.

By hand
Peter gets down on his knees and grabs a sickle. With his left hand he grabs a large bunch of flowers, while with the sickle in his right hand he cuts them low to the ground. “We always check if there are enough flowers on the bunch, before we pass them on to the one behind us, who puts a rubber band around it. Everything here goes by hand, because that’s the only way we get the very best result. If you hang these dried flowers in a not too bright place, you can enjoy the beautiful colours for up to twenty years”.

Satisfied I walk out of the greenhouse that afternoon. How grateful I am for my work and for partners like Peter. Thanks to his expertise, we can once again make a lot of customers happy.

We are masters in enchanting dried flowers. We select the most beautiful dried flowers from our own soil, yet we also travel all over the world to find natural drying decorations. Lovely lavender, heavenly hydrangeas, enticing Amaranthus, in a beautiful vase or on a wreath: you can enjoy dried flowers in endless ways. The dried flowers of Dutch Masters in Dried Flowers are sustainable and totally fancy.